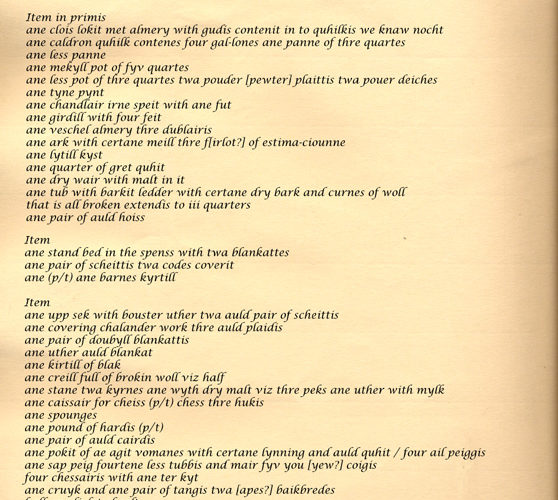 Each town in Scotland had its legal representations recorded in a protocol book. Selkirk’s protocol books have been transcribed by local experts and are available for purchase from Selkirk Museum.  For an explanation of how these medieval documents were saved from fire, and subsequently recorded for posterity, click here for an explanation.

The contents of the house of Marion Dalglesch 1536 are listed in this entry.

The list of property was probably made because there had been a death, perhaps of her husband. The entry is interesting because it shows that a chair or other item had been put outside the house and was taken as a sign of distress. This usually meant that the person was to be evicted. It seems that some Selkirk men thought that the lady was about to be evicted. They realised that the chair was normally kept there and thus made a mistake. They went to a legal person to swear on the oath that they had made a mistake. It is stated that the lady is now the spouse of Robert Scot, so perhaps the inventory is the household of a marriage which ended in the death of her first husband. This is all speculation. The evidence is a follows:.

154.Dalglesch 11 August 1540
Adam Dalglesch in Deuchar showed in presence of witnesses that the chair [“cathedra”] which was placed on the Friday before the feast of Whitsunday preceding in name of “distres” of the house of Marion Dalglesch now spouse of Robert Scot of Howfurd was not put there [for that purpose] by anyone and it stands at the door as if it were placed. Adam asked instrument before master John Bruyss notary public and servant of our old queen Margaret, Alexander Hesloip,Thomas Hesloip, [blank] Clerk,Alexander Carmaig done around 9[am] .

Goods and contents listed in the house of Marion Dalglesch

The Protocol Book of John Brydin & Ninian Brydin and other notaries, 1526 36 Book…