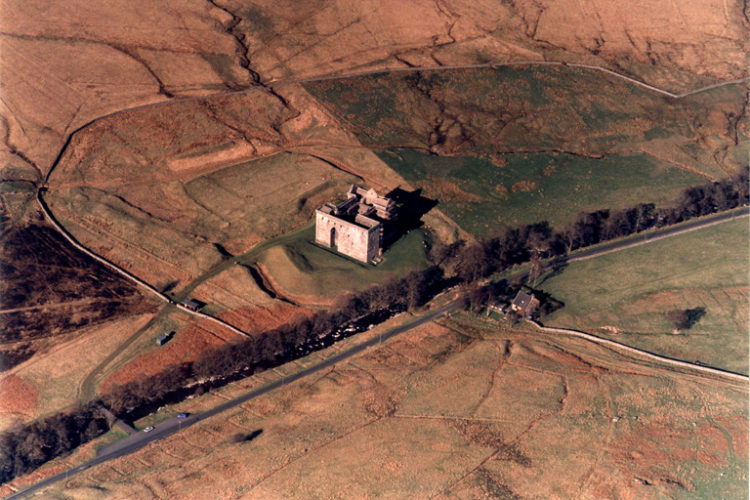 The menacing ruins of Hermitage Castle, “The Strength of Liddesdale”, stand by the Hermitage Water high in Liddesdale. Few Scottish castles can vie with it in interest and emotional appeal. It was Sir Walter Scott’s favourite castle and he chose it as a background for his portrait by Raeburn.

As a consequence, the Castle passed to the Douglas family and the present building was completed by the first Earl of Douglas and his heirs by around 1400. In 1492, the family was forced by the king to exchange Hermitage for Bothwell Castle and thus the Hepburns became ‘Keepers of Liddesdale’.

The castle was held successively by the great families of Soulis, Dacre, Douglas and Bothwell and has a colourful history as a Border fortress. It was the stronghold of the “Keeper of Liddesdale” whose task it was to keep law and order among the troublesome Reivers of this most unruly valley. Mary Queen of Scots, rode here from Jedburgh in 1566 to attend her lover and eventual husband James Hepburn, 4th Earl of Bothwell, who had been wounded in a brawl with Wee Jock Elliot, resisting arrest, at Tourneyholm, Kershopefoot. The 50 mile round trip brought on a fever which nearly killed her. Hermitage Castle is now in the care of Historic Scotland.