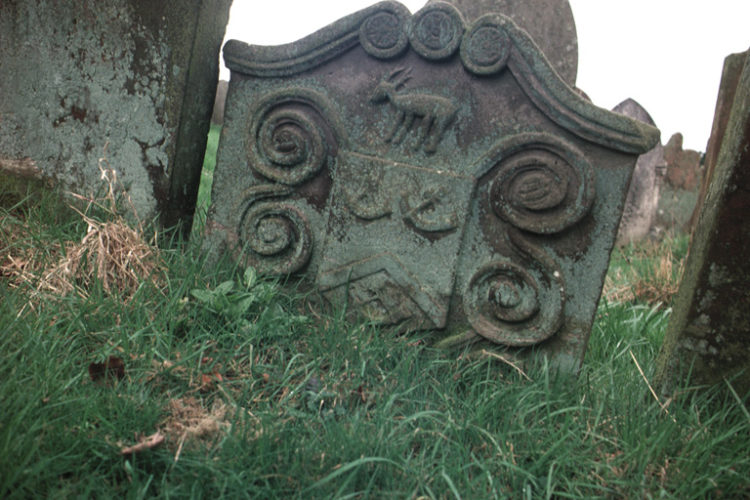 At one time the strongholds of the Border lairds must all have had a heraldic panel on the wall or above the doorway to denote the lairds descent and status. A few of these can still be discovered in situ, at Fourmerkland for example, or removed to other buildings, they are often the only surviving relic of a lost tower.

The carved memorials in the old Border Kirkyards are a rich source for the coats of arms of the Border clans. The earlier stones are the simpler ones and carry undifferenced arms that strictly speaking are those of the head of the family, but are used informally by other members in the manner of a clan badge.

The reason for the adoption of some heraldic devices is apparent in arms such as those of Forster who display the hunting horns of their trade and a stag as crest. Similarly, Armstrong displays armoured arms on both shield and crest and Turnbull displays a bull’s head.

Other well-known heraldic devices that can be discovered on carved stones and memorials in the Borders are the bells of the Bells, holly leaves of Irvine, the saltire of Maxwell, the three square locks of Grierson of Lag, the stars of Ker and the crescents of Scott. The heraldic gravestone of Robert Forster of Stonegarthside in Liddesdale who died in 1598 displays his arms and crest.

The Bishops Curse of the Reivers in Glaswegian Dialect

The Bishop Curses the Reiver Body in Dialect