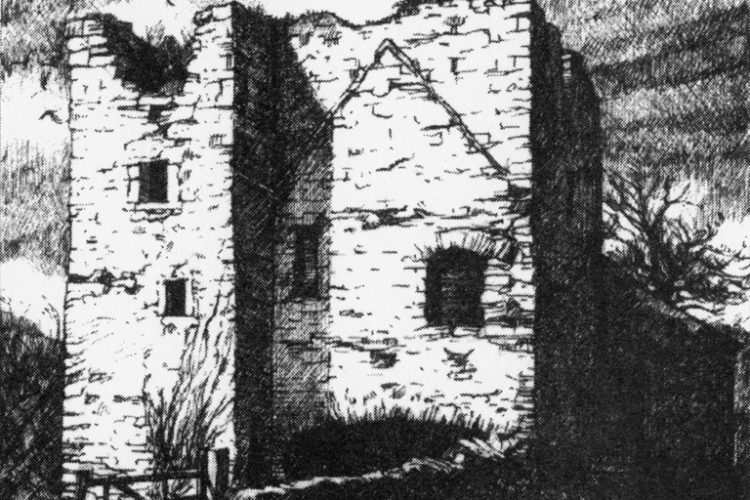 The substantial remains of this interesting little L-shaped Border tower-house stand about a mile east of Arnside in Cumbria. The tall tower of four storeys is roughly built from limestone rubble and may date from the late 14th or 15th century. The walls are only three feet thick apart from the massive east wall against which the hall range once stood. The building may have been built by the de Thweng family.

There were three storeys above the basement vault including an attic. The tower is roofless but complete to the wallhead. The tower roof and that of the stair turret were probably separate and both pitched within gables. The thin walls (only three feet thick) would leave no space for a wall-walk or parapet.

The doorway, photographed in 1986, with its pointed arch, is set in the re-entrant angle between the massive east wall and the projecting wing at Haselslack. The fireplace of the demolished hall range can just be glimpsed on the right of the picture, set in the massive masonry of the east wall.

A massive fireplace is built into the thick end wall to the east that was shared by both the tower and the now demolished hall range. The ruins of this interesting little tower of the West March of England are today sadly uncared for and in a dangerous and dilapidated state.

The basement was vaulted and a newel stair gave access to the floors above; the levels of these can be traced from the surviving projecting corbels. The roof has long fallen and the manner in which the tower was roofed is difficult to reconstruct; there must have been little space for a wall-walk.

The 1986 drawing shows this interesting little tower of the English West March from the east. It was in an unkempt and dilapidated state at that time and is still in this sad and dangerously unstable condition today. The hall fireplace can be seen in the massive east wall and the roof line of the long gone hall range can be traced above this.

The interesting remains of this little fortalice of the English West March remains at Hazelslack The ruins at Hazelslack seem to be those of a tower house that would not be out of place north of the border. There would seem to have been no room for a wall-walk or parapet and it is probable that the structure had a pitched roof within gables. The stair turret may have been roofed in a similar manner. The interesting remains of this little tower of the English West March are now uncared for and in an unkempt and dangerous condition. The roof and floors have fallen as has the stone vault of the basement which is filled with modern rubbish.