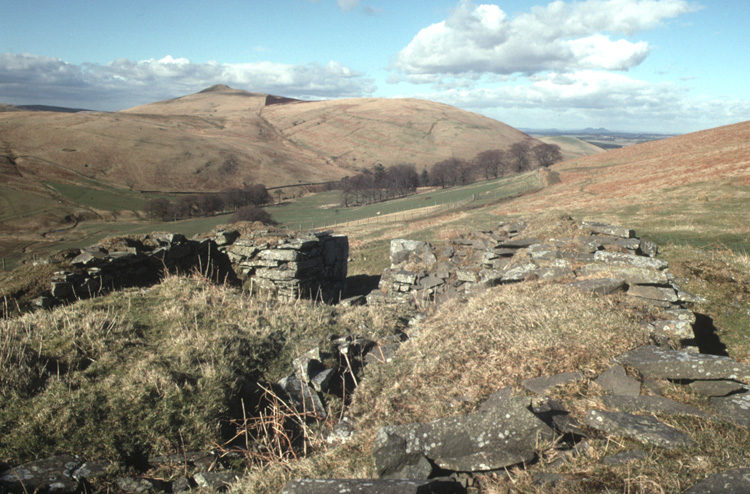 Pele-House on the slopes of Gray Coat above Dod Burn in Roxburghshire.

High on the south-east slopes of Gray Coat, overlooking the Dod Burn valley are the remains of a pele-house and associated buildings. These are all sited within hailing distance of the old road known as the “Thieves Road” that leads from Teviotdale into Liddesdale.

The walls of the pele still stand about four feet high, there is no indication of vaulting to be seen and the interior is filled with rubble. Excavation has revealed the ground-floor entrance in the gable-wall which has dressed stone jambs similar to those found in the pele-houses of the upper Jed Water valley.

The probability is that the Gray-Coat remains are those of a similar structure to the upper Jed pele-houses and thus represent a building type rare in Scotland. The comparatively common occurrence of pele-houses or bastles south of the Border is difficult to explain. Perhaps the need for security reflected by these strongholds was the same on both sides of the Border.

The scarcity of remains of these strongholds of the non-lairdly classes in Scotland may reflect an economic imbalance between the Border communities in the English dales and their presumably less well-off Scottish counterparts.