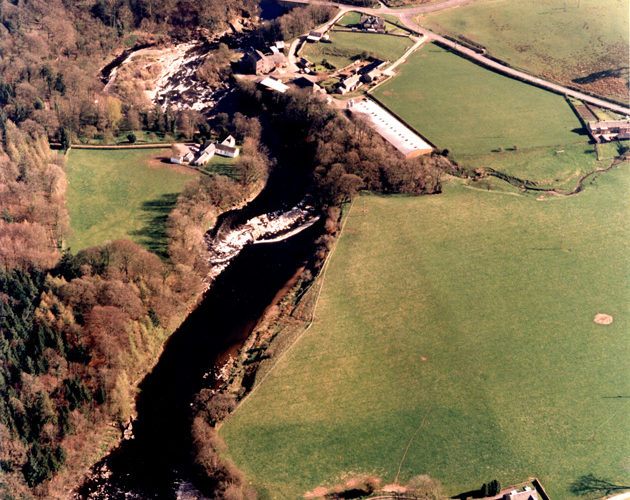 The sites of Gilnockie Castle and Hollows Tower both lie on the river Esk about two miles north of Canonbie and both are visible in this aerial view. Hollows Tower, which has often been confused with Gilnockie can be seen in the bottom right of the view, a white ribbon of road leads to the tall tower.

Gilnockie Castle, which is now only traceable as a series of overgrown humps and mounds, is situated on a promontory above the right bank of the Esk just beyond and to the left of the bridge but hidden by woodland towards the top right of the view.

The site is associated with that best known of Border Reivers; Johnnie Armstrong, the Laird of Gilnockie alias “Black Jock”. An early account of the building suggests that it was an oblong tower of red sandstone with loopholes and two angle turrets within an earthwork. The remains of the stonework of the tower are said to have been removed when the bridge nearby was built at the end of the 18th century.