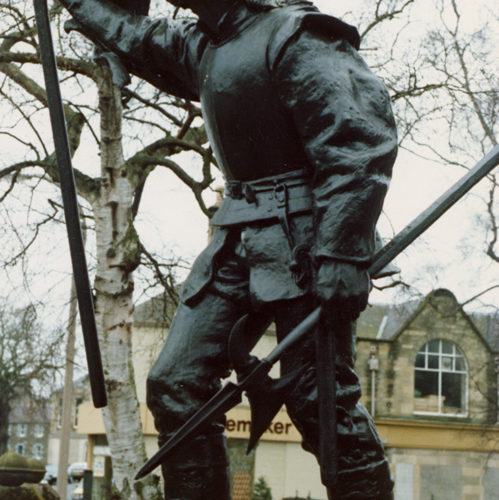 The sculptor Thomas Clapperton (1879-1962) was born in Galashiels, the son of a well-known local photographer. He studied at the Glasgow School of Art and at the Royal Academy Schools. His 1913 memorial outside the Victoria Hall is entitled “O; Flodden Field” and embodies the Flodden tradition of Selkirk.

Tradition has it that of the men of Selkirk who fought at the disastrous Battle of Flodden in 1513 only a weaver named Fletcher returned, clutching a captured English flag. He had been struck dumb by the horror of the battle and the loss of so many of his friends so he dipped the flag to indicate the grim tidings.

Fletcher’s gesture is re-enacted during the annual Common Riding celebrations in Selkirk in the ceremony of “casing the colours”. There are several other examples of Thomas Clapperton’s sculpture in the Borders. Selkirk is fortunate in having not only “Fletcher”, but also the well-known memorial to Mungo Park and the town’s War Memorial too. The War Memorial in Galashiels, better known as the “Border Reiver” along with those in Canonbie, Minto, Galashiels and Earlston are also by Thomas Clapperton.