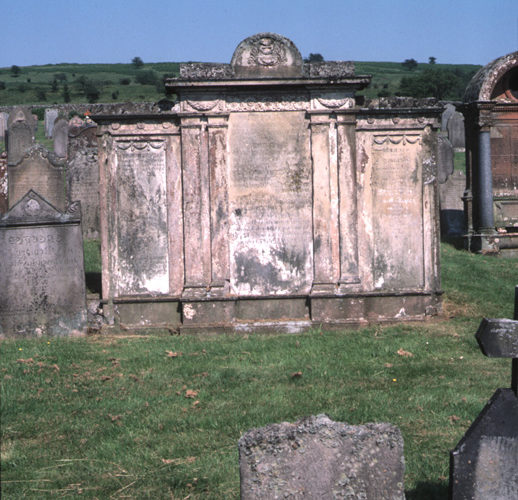 The site of Ettleton Church, which stood about a mile south-south-west of Newcastleton in Liddesdale, is known but there are now no visible remains. Its kirkyard contains several fragments of early tombstones, some dating from the early 14th century and possibly associated with the Armstrong clan.

The memorials are a poignant reminder of the old families of Liddesdale and proudly display their names and in many cases their arms and crests. Most of the old families are gone from the dale now as deportation, emigration and the clearances of families from the land by later landlords reduced the population.

The memorial to William Armstrong of Sorbietrees ( illustrated ) recalls a tragic incident in 1851. Mr Armstrong was a well-to-do farmer who had been drinking in Brampton with friends after a day conducting his business there. Later in the evening, on his way home, he decided to call at the parsonage at Walton. The Rev. Smith, a timid, though it appears well-armed incumbent, heard knocking at the window of his study and went to the front door, made a great noise, and fired his pistol two or three times into the dark. The body of the popular farmer was found outside in the morning.

His widow of fifty years was eventually evicted from the farm at the age of 72 by the vindictive Duke of Buccleuch who had made it his business to weed the last remaining Armstrongs out of the dale. Elizabeth Armstrong died at the age of 80 and lies close to the grave of her husband in Ettleton kirkyard.