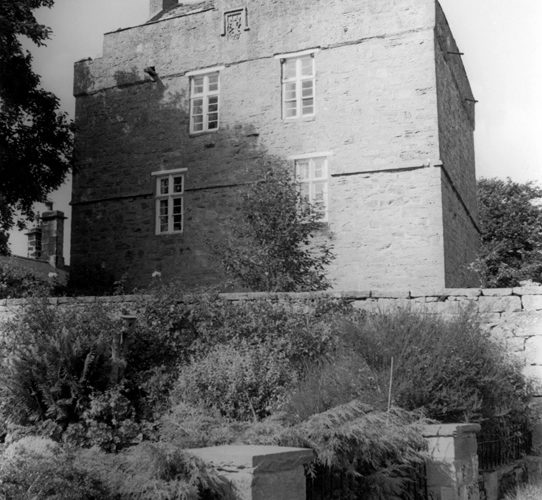 Three miles east of Otterburn, the old grey pele-tower at Elsdon stands on the high bank of the Elsdon Burn and dominates the dwellings that fringe the village green. The arms of the Umfravilles, who were Lords Redesdale up to 1436, are built into the west wall, so the tower was probably built before that date.

The tower retains its original external shape and rises to two storeys and a garret above the vaulted basement. A newel stair gives access to all floors and goes up to the parapet walk. There is a corbelled-out projection over the original doorway, surely not a garderobe!

Early in the 15th century the Tower became the property of the Church and served as the vicarage until recent times. The Rev. Charles Dodgson, father of Lewis Carroll lived here for three years and wrote amusingly of life in the tower;

“ I have lost the use of everything but my reason, though my head is entrenched in three nightcaps, and my throat is fortified with a pair of stockings twisted in the form of a cravat, the vestibule of the castle is a low stable, and above it is the kitchen, in which are 2 little beds joining to each other. The curate and his wife sleep in one, and Margery, the maid in the other. I lay in the parlour between two beds to keep me from being frozen to death”.