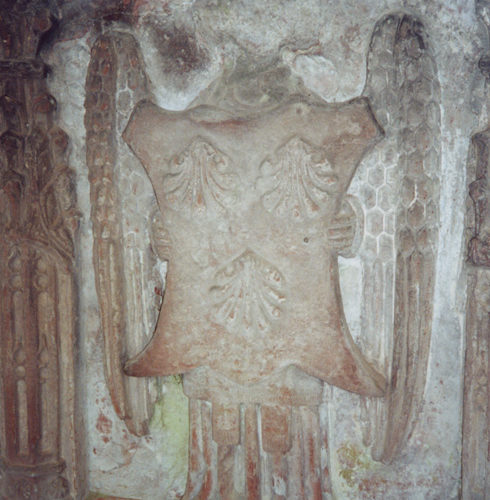 The tomb of Sir Humphry Dacre, Lord Warden of the English West March who died in 1485 stands in the Chapel in the North Transept of the Church of Lanercost Priory. This part of the church stands open to the sky now and has been a ruin since the dissolution of the Augustinian Priory in 1536.

Sir Humphrey was the father of Thomas, Lord Dacre of Flodden fame who succeeded him to the Wardenship in 1485. There is no effigy but the tomb carries a fine display of heraldry; a standing angel holds a shield displaying the three silver scallop shells of Dacre though the red background has long gone.

The end-panel of Sir Humphry’s tomb is in the best state of preservation and here is carved a decorative cusped shield displaying the extent of the Dacre Estates. The heraldry represents the baronies of Dacre, Vaux of Triermain, De Lancaster and Morville. Sir Humphry Dacre fought for the Lancastrian cause at the Battle of Towton in 1461and took part in the attack on Carlisle later that year. He obtained a pardon from Edward IV in 1468. He was created Baron Dacre of Gilsland and in 1482 was a personal retainer of Richard, Duke of Gloucester. He was Warden of the English West March in 1484 and died the following year.