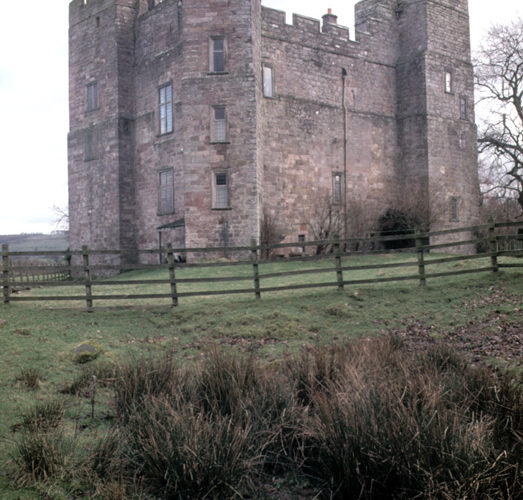 Dacre Castle is a three-storey towerhouse of the 14th century, situated on a spur of high ground south of the church in the village of Dacre. The tower stands in the corner of a rectangular enclosure which was surrounded on three sides by a wet ditch or moat, and on the fourth side, probably by a wall.

The tower has projecting angle turrets at each corner. The original doorway was at the foot of the newel stair in the west turret from which access was also gained to the double vaulted ground floor. The doorway was moved by Thomas Lennard, Lord Dacre who made the derelict tower habitable in 1674.

It is this later Lord Dacre whose arms are seen above the entrance today. There are still substantial remains of the wet ditch to be seen and the tower is in good order and inhabited. Though the interior has been changed, the exterior is still that of an ancient stronghold of the West March. Ranulph de Dacre’s pele at Dunmalloght is mentioned in 1312 and it is possible that Dunmalloght is Dacre. The pele was destroyed by the Scots in 1317-18 and replaced by the tower we see today around 1350. The castle was restored and modernised inside in 1961.