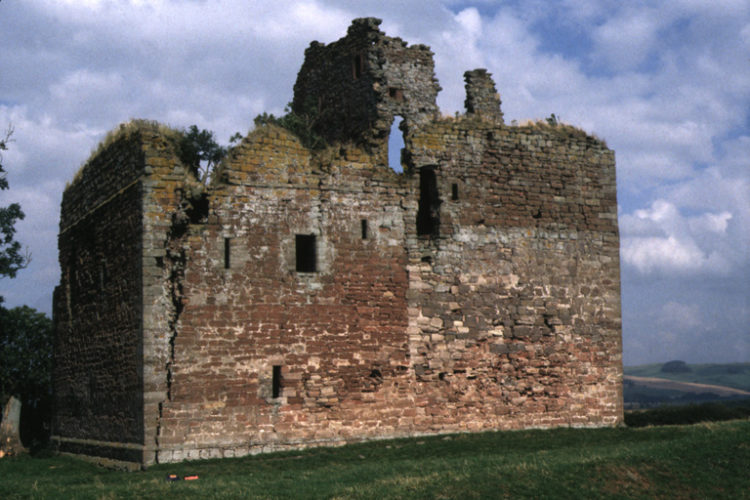 Cessford Castle and the Siege of 1523

The ruin of Cessford Castle, which in 1523 the English esteemed the third strongest in Scotland, stands on high ground overlooking the valley of the Kale Water, six miles north-east of Jedburgh. The massive L-plan tower is within an earthwork and was built in the 15th century by the Kerrs of Cessford.

The ruinous condition of the tower is evidence of the vicissitudes that the castle suffered in the 16th century. The walls of the main tower block are deeply rent and the superstructure over the first floor hall is ruinous and inaccessible. The remains retain much of architectural interest despite their present condition.

In May 1523 the Earl of Surrey, with Lord Dacre attacked the castle, in the absence of its owner, with a battery of eleven cannon.

The commander’s report not only gives interesting details of the siege operations but also some particulars of the structure of the castle. The fortress had an outer defensive rampart of earth and a barbican but the English battery had little effect on this well-constructed earthwork.

Meanwhile an assault with scaling ladders was launched under cover of a fierce artillery barrage and a hail of arrows from the archers, but to no avail.

At this critical point two artillery pieces were brought to bear on a blocked window in the tower about six feet above the ground, and a hole was battered in the ground floor. The gunners then shovelled in four barrels of powder, but the Scots seeing what was happening set fire to this part of the castle.

(The demolition of a vaulted chamber by powder was a customary practice with the English, which the Scots had learned to counter by filling their vaults with inflammable material and setting fire to it.)

Three of the gunners were badly burnt and the powder was wasted without injury to the fortress.

Shortly afterwards the owner, Sir Andrew Kerr, Warden of the Marches, returned and surrendered the castle, being allowed to depart with bag and baggage.

The English commander remarked that had the defence been continued he did not see how the place could have been taken.

He records that the tower wall was 14 feet thick. The English “cast down” Cessford in 1519 and burnt the castle in 1543 and again in the following year. It is little wonder that the remains are in a shattered and ruinous state.