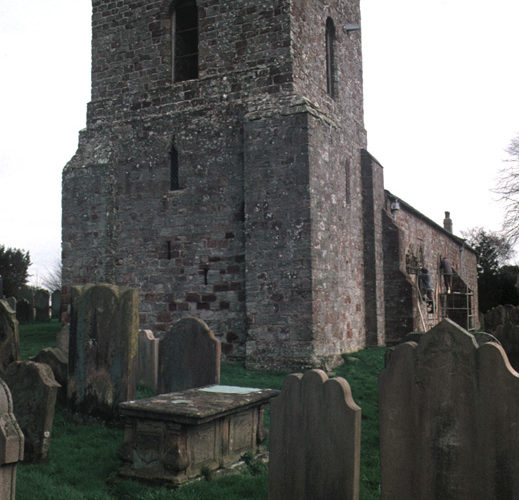 The Solway village of Burgh-by-Sands lies on a route frequented by Scots Reivers in the past who forded the Solway here. The fortified Church tower was built of stones from the nearby Roman wall in response to the threat posed by the nocturnal raiders.

The tower at Burgh-by-Sands Church is in fact a pele-tower. The walls are nearly eight feet thick and the entrance, from the nave, is guarded by a strong iron “yett” secured by a stout wooden drawbar. The cramped, vaulted ground floor is provided with what seem to be gun-loops.

There was at one time a second tower for the vicar at the east end of the church but this has been reduced to the height of the nave now. Church and tower are still in everyday use but the fortified tower is a curiosity now rather than a refuge. Other fortified churches on the Border include nearby Newton Arlosh, Great Salkeld, Penrith and Dearham in the West March and Ancroft in the East March.