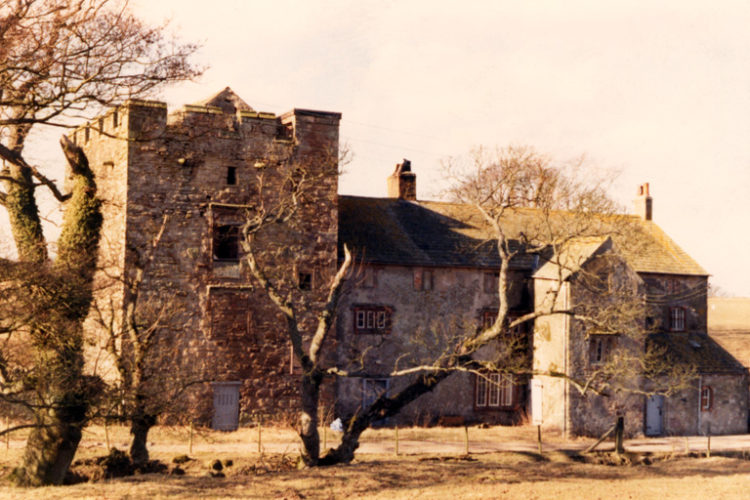 Branthwaite Hall, Dean, Cumbria, from the East in 1986 before restoration work

Branthwaite Hall stands between the hamlets of Dean and Branthwaite about five miles to the south of Cockermouth.  The imposing battlemented 14th century tower is nearly forty feet high with walls four and a half feet thick.  The original narrow slit windows can still be seen.

The well-preserved tower retains its battlements and wall-walk. The very narrow wall-walk is no more than a foot wide and is not continuous as the caphouse over the newel stair prevents this. The cramped wall-head would have served as a vantage point for a lookout in times of unrest on the Border but could never have been a practical fighting.  It would have been quite impractical in this confined space to fire and reload a longbow, crossbow or musket.

The double basement typically is stone vaulted and there are two storeys and an attic above.  The floors are reached by a newel stair, which ends in a turret with a gabled roof.  The Hall wing is of several periods, there is a Tudor window (with rounded tops to the lights) in a projection to the east.  On a window moulding near the south doorway can be found the date 1604.  The north elevation of the Hall was remodelled in the Renaissance style in the early 18th century.