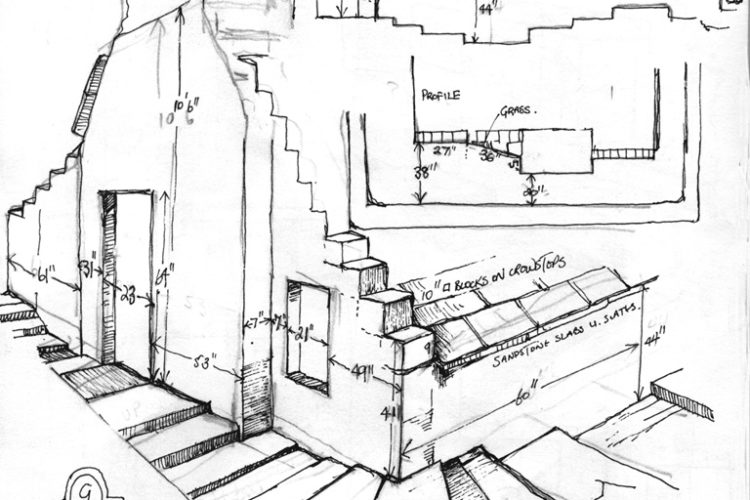 Details of the wall-head of Brackenhill Tower, Longtown, Cumbria, from 1986 sketchbook by Pete Armstrong

Page from a 1986 sketchbook recording original features and dimensions of the wallhead at Brackenhill Tower. The battlemented parapet is corbelled out to give more width to the wall-walk, which is three feet wide, but the space on the wallhead is still very constricted and hardly suitable as a fighting platform.

A tapering pistol hole cut into a merlon (upright part of the battlement) suggests that firearms were meant to be used on the wallhead. Centre page is a drawing explaining the drainage arrangements of the stepped wall-walk. At the bottom of the page are dimensions of the wallhead and details of the attic storey.

Brackenhill’s insecure situation so near the border of the West March and close to the Debateable Land, make its survival in so complete a condition remarkable. It stands four miles east of Longtown on the river Line and an inscription on the wall carries the date 1586. It was a stronghold of the Grahams who held sway in the area and in the late 16th century was the lair of the notorious Reiver Ritchie Graham.