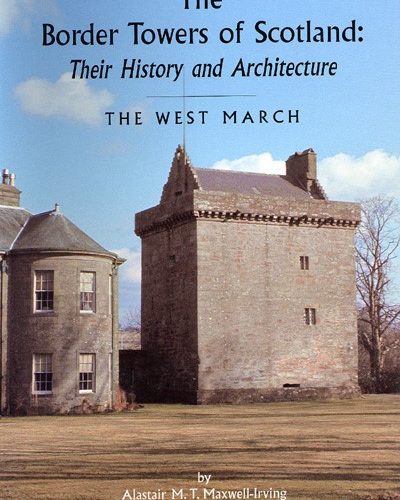 The Border Towers of Scotland – Their History and Architecture.

This work gives a concise account of the his¬tory and architecture of the surviving tower-houses in the West March, as far as the Ken-Dee valley. These were the towers that played a central role in everyday life in the Borders during the later Middle Ages and immediately after the Reformation, the fortal¬ices that, in the main, were built not so much as a defence against an invading English army, but as a family’s protection against local raiders from across the Border, or other clans and families with whom they were at feud.

To present a more complete picture of each property, the author has included, so far as he is able, a brief account of each property’s his¬tory from the earliest surviving records to the present day. This may include the existence of an early motte-and-bailey castle, which once stood on the site or nearby, and one or more later houses built for greater conve¬nience and comfort in the more settled times that followed the Union of the Crowns in 1603. There is also a short account of the families who built and occupied the towers, and of the public offices which they held.

The architecture of the towers themselves is described in considerable detail, with many photographs and old etchings to complement the text. Some of the towers have survived in remarkably original condition, whilst others have been altered or modernised almost beyond recognition. A few have been vacated and abandoned within living memory, whilst others have been restored to become family homes once more. Some have decayed to lit¬tle more than heaps of rubble. Four especial¬ly fine examples have been ‘frozen in time’, preserved and maintained for the State by Historic Scotland.

In addition to the individual ‘vignettes’ on each tower, there are introductory chapters on: the local families through the centuries; the progressive development of the tower¬houses, and the different forms which they took; and a commentary on, and comparison of, their individual features. It is believed to be the first published study of its kind relating to mainland Britain.

Alastair Maxwell-Irving has had a keen interest in archaeology, antiquities and family history from a very early age. Whilst attending Lancing College in the early 1 950s, his early interest was influenced by Sheppard (“Sam”) Frere, a distinguished archaeologist and one of his classics masters, who was later to become Professor of the Archaeology of the Roman Empire at Oxford. He subsequent¬ly decided to concentrate on the study of Scottish castles and, in particular, the tower-houses of the Scottish Borders, whence his forebears came. He has since spent over 40 years studying these tow¬ers — excavating, surveying, photographing and researching them. He has also worked in close collaboration with the staff of the Royal Commission on the Ancient & Historical Monuments of Scotland for over 30 years, and is particularly indebted to John Dunbar and Geoffrey Stell for much invaluable help and encourage¬ment. He is by profession a chartered engineer, now retired, and is a Fellow of the Society of Antiquaries of Scotland.

Some of the vignettes have already appeared (in earlier versions) in the Proceedings of the Society of Antiquaries of Scotland or the Transactions of the Dumfriesshire & Galloway Natural History and Antiquarian Society, as have a number of spe¬cialized papers on individual aspects of the sub¬ject. Notable among these was a paper on ‘Early Firearms and their influence on the military and domestic architecture of the Borders’, which was published by the Society of Antiquaries in 1974.

Other works by the same author

THE BORDER TOWERS OF SCOTLAND: THE WEST MARCH

by Alastair Maxwell-Irving, published by the author. Reviewed by Peter Yeoman.

The landscape of this part of the Anglo-Scottish border is characterised and enriched by the remains of scores of tower houses, strong points that sustained lordly life within the ‘Debatable Lands’ during the later medieval period. This book is the serious ashlar-hunters dream – a weighty volume of over 300 pages which takes us on a real or armchair tour, in marvellous detail, around the 90 towers to be found in Dumfriesshire and the east part of Galloway. From the great tower of the Crichtons of Sanquhar in the north, to Annan in the south, and from Johnnie Armstrong’s bolthole of Langholm in the east, to the massive Douglas castle of Threave in the west, we are treated to an unrivalled exposition of history and defensive design.

The author brings impressive credentials to this study; a family link with the Maxwells of Caerlaverock has meant that his passion for the towers is bred in the bone, while his objective eye as a chartered engineer has resulted in a masterly dissection of the historic fabric of each site. Introductory essays provide the historical context for the principal lordly families, as well as an essential analysis of the development of the architectural The

form through time. This is followed by a chapter on the features of the towers, where they are divided into no less than 33 component design elements, from doorways to dormers, along with external and extended features such as courtyards and deer parks. This is a unique and extraordinarily helpful approach that allows a greater understanding of how these buildings actually worked.

The gazetteer is laid out in alphabetical order, giving a fullsome description of each tower within its landscape, historical and archaeological context. The whole book, and especially this part, is extremely well illustrated with almost 400 photos and old drawings, as well as with the author’s own high-quality plans and cross-sections. Here we find the complete range of these adaptable defensive forms, from the bastles of the better-off farmer, to the great towers as expressions of lordly prestige exemplified by the Black Douglas’ Threave. The latter is one of the four properties in the care of Historic Scotland featured in the book, along with Drumcoltran, MacLellan’s and the lovely Orchardton. Further insights into the towers as family homes is provided in an appendix which contains two inventories of contents, one of Torthorwold in 1544, and the other of Comlongon in 1624. Here we find the long-vanished details of tower-house living, from feather beds to “ane pitcher of huny contenand tua gallonis.”

The book represents an enormous personal achievement, not least because Mr Maxwell-Irving has published it himself. It is extremely well designed and easy to use, while the quality of the printing, paper, and photographic reproduction are all of the highest order. The title leaves the author open, having drawn breath, to go on to apply the same treatment to the Middle and East Marches –a great feast to look forward to.

RECOMMENDED READING: Online resources: The Lord Wardens Of The Marches Of England And Scotland Full…