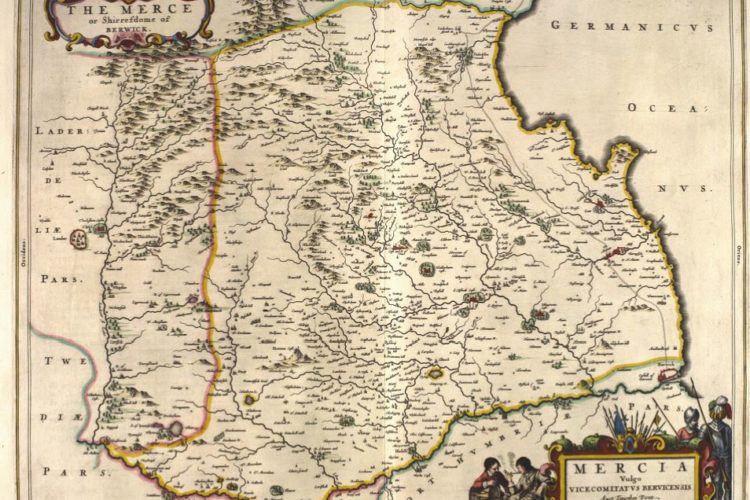 These maps were printed by Blaeu from notes made by Timothy Pont with Gordon adding to them.  The maps were published in an atlas and also were printed as separate sheets which had on the reverse of the map text that was based on the notes supplied to the map maker Blaeu who resided in Netherlands.  The text on the reverse was either in medieval French or Latin, both having “latin-ised” versions of names.  Our translations are below. 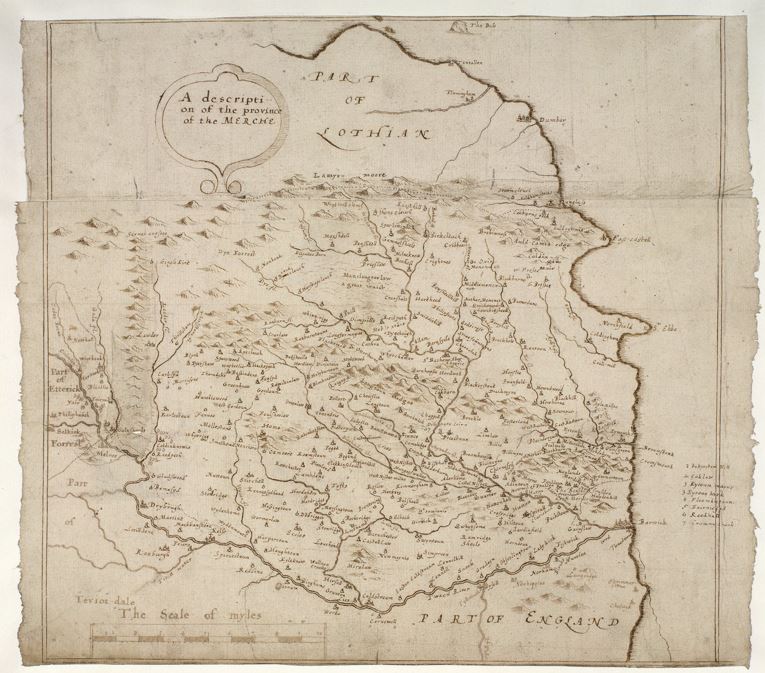 A map of the eastern part of the Borders, bounded by the River Tweed from Selkirk to Berwick-upon-Tweed in the south and by the Lammermuir in the north. The map was compiled by Robert Gordon of Straloch (1580-1661), at an unknown date after 1633. The source of the compilation was the observations of the surveyor Timothy Pont, in the last two decades of the sixteenth century. More detailed coverage by the Pont of the same area can be found in a map entitled THE MERCE published in Amsterdam by Joan Blaeu in his famous ‘Atlas Novus’ of 1654, although there are some place-names located on the Gordon manuscript map which do not appear on the engraving. 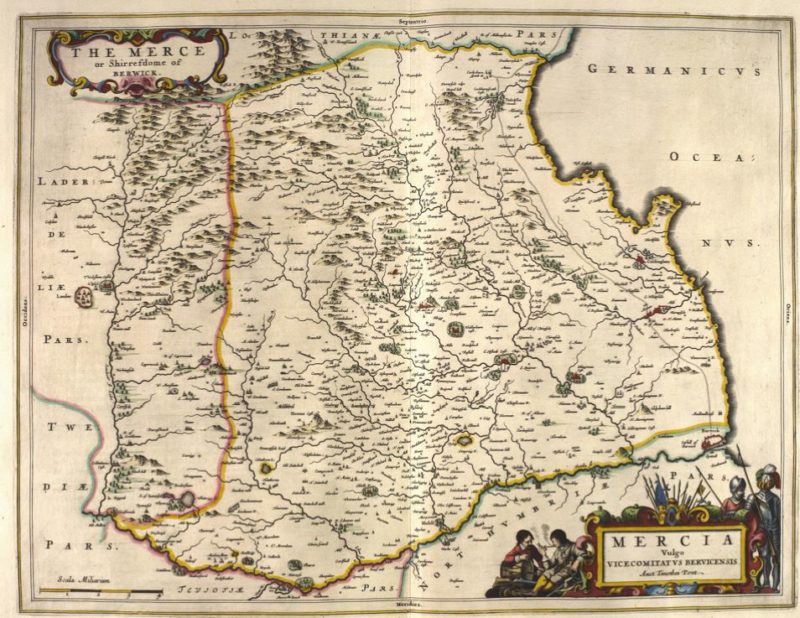 A map showing most of Berwickshire, from the Lammermuirs in the north, to the River Tweed in the south and the Leader Water in the west, including the catchments of the Whiteadder and Blackadder Waters, together with small parts of Roxburgh and East Lothian. The map provides a unique record of the densely populated lower Tweed, with many churches, mills and castles. The depiction of a routeway is particularly unusual on maps of this time. The map was compiled from observation on the ground by Timothy Pont in the last two decades of the sixteenth century. It was one of the first such drafts by Pont to be engraved in Amsterdam, for publication in Blaeu’s Atlas Novus, first published in 1654.  Named Mercia, vulgo vicecomitatus, Bervicensis = The Merce or shirrefdome of Berwick 1662 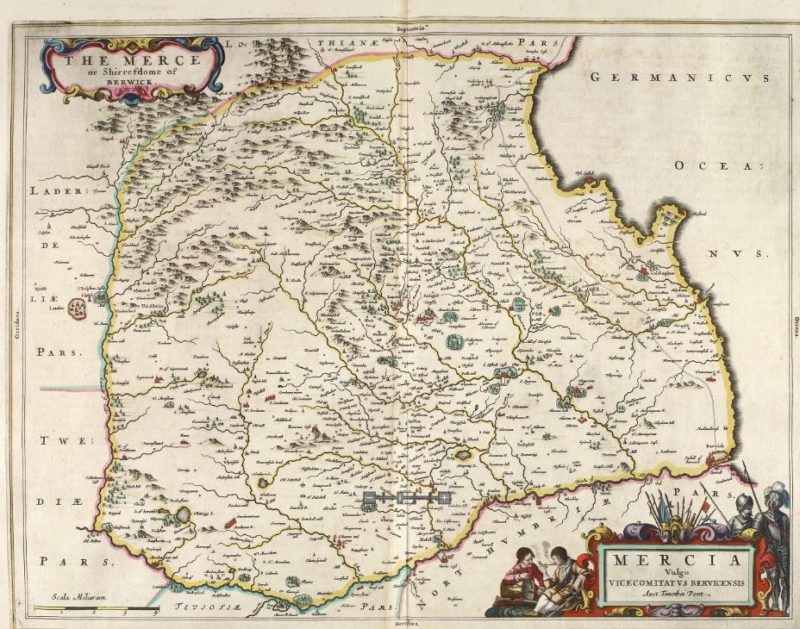 Translation of Berwickshire Merse text from The National Library of Scotland

‘Marcia’ is the name of the land which first occurs on the boundaries of Scotland and England on the east side. For March means boundary, and although the vernacular pronunciation of the region is now Merse, the earldom of March, which is widely spread in this province, formerly the patrimony of the Dunbars, still keeps the old name.

In the middle of the region is the small town of Duns, where the annual prefect (called Sheriff) dispenses justice to the people of the Merse. This was the ancient patrimony of the Lords of the town with the surname Duns; from this family came the famous accurate scholar, John Duns, who obtained the additional name Scot from his country. Today a few members of the family survive, citizens of the same town.

Above Berwick (the old capital of the Merse) the River Tweed separates the English region Northumbria from the Merse, as far as Carham Castle; from there the torrent called Rede, flowing from the Cheviot mountain, marks off Northumbria from the Teviot region of Scotland or Teviotdale. From the south-west the Ednam Water (which joins the Tweed near Sprouston) divides the Merse from the same Teviotdale, as far as the place Smailholm Mill: from there the boundary extends to the west in almost a straight line to the Lauder or Leader Water near Redpath Castle. Beyond Redpath the Leader Water (as far as a stream called Boon, near the place Boon-mill) is the boundary in the Merse of the Lauder region or Lauderdale. Indeed Lauderdale is actually part of the Merse, formerly the patrimony of the Morvilles (who were foreigners and whose line is now extinct), Constables of Scotland. At the ruin of that family, condemned for treason, Lauderdale was annexed to the King’s patrimony and as is normal in royal estates has its own Judge or Bailie; this magistracy is exercised by the noble Lord John Maitland, Earl of Lauderdale. Beyond the source of the Boon stream, the boundary of the Merse by an oblique line drawn on the map extends through the middle of the Lammermuir Hills, which partly face the Merse, partly Lauderdale, and partly also Lothian. In the north it is enclosed by a stream which flows past Dunglass, the castle of the Earl of Hume. The remainder is washed by the German Ocean.

Above Redpath on the bank of the Leader Water is the estate of Erceldoune, the home of Thomas Learmonth, who lived about the year 1290 A.D. In addition to many other prophecies proved by the event, he foretold that a man would be born in the ninth generation from the daughter of Robert Bruce (who later came to power in Scotland), who would govern the divided kingdoms of the Britains under a common rule. This prediction, long repeated, was finally more than three hundred years later fulfilled by the happy elevation to power in England of James VI, King of Scots.

The whole of the Merse, within the Lammermuir Hills which are well blessed with pastures, nourishes with its fertile soil numerous inhabitants, in peace industrious, in war stout-hearted, who used to defend their possessions most bravely against the English, separated by a moderate-sized river. It has too many very strong castles, formerly safe refuges against the armies of the English; of these the principal ones are Hume set on a steep hill, which gave its name to the Earls of Hume, and the whole family of Humes, the most powerful in the Merse; and Fast Castle on a promontory of the German Sea, well defended both by natural position and by human industry. Duns also, and Langton and Nisbet are quite strong castles. So too Wedderburn and Ayton, both belonging to the Humes.

Below the fort of Fast Castle on the shore of the German Sea is Coldingham, until recently a noble and wealthy monastery, the work of Edgar King of Scots, who lived about the year 1100 A.D. Dedicated to the virgin St Abb, whose neighbouring promontory, in the vernacular St Abb’s Head, is pretty well known to sailors, it was later transferred to the name of St Cuthbert. The Merse also had communities of monks at Coldstream on the River Tweed and further inland the church of Strafintan (or Trefontan) and St Bathan’s, founded by the Earls of March or their (1) wives.

There are in this province 35 curacies, or as they call them, parish churches, in the diocese of the Bishop of Edinburgh. The whole region abounds in all necessities of life, except that most are forced to import coal for their fires from neighbouring regions, especially those who face the Tweed. It is also all finely adorned with splendid houses of the nobility, except the coast of the German Sea, which is harsher in soil and less cultivated.