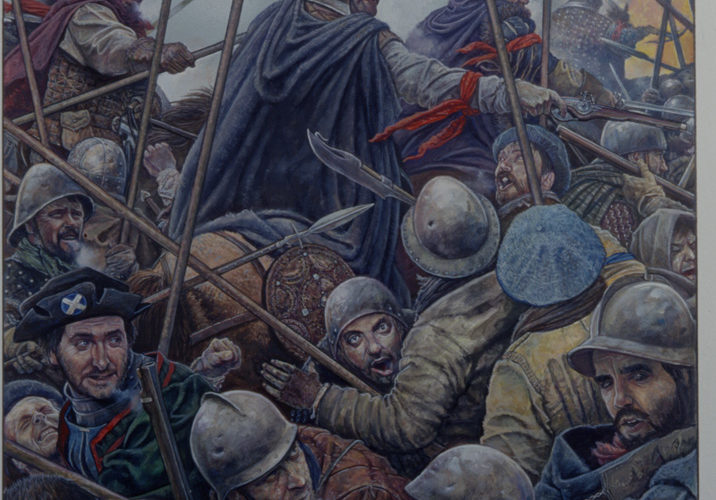 Painting of The Battle of Solway Moss, by Rick Scollins, c.1986.

The illustrator Richard Scollins specialised in military subjects. His painting of “The Battle of Solway Moss” is among his best work; the history of the Anglo-Scottish Border was a favourite subject. The painting is peopled with Rick’s friends and collaborators and he himself appears as a fugitive in the foreground

Henry VIII and James V were increasingly at odds in the early 16th century and by 1542 matters had come to a head. In October of that year, the Duke of Norfolk led 20,000 men into Scotland and burnt Roxburgh. James retaliated by sending a Scottish force of 17,000 men under Lord Maxwell to devastate Carlisle.

Deputy Warden Thomas Wharton could only muster 2,000 men to oppose the Scots. On seeing the flags of the small English force on the heights above them and fearing it to be part of a much larger army, the heart went out of the Scots who hesitated then turned in disarray and were routed by Wharton’s “prickers”.

Opposition to the invasion on the part of the Scottish Nobility, along with confusion about leadership in the absence of the King was blamed for this ignominious defeat. James V was dead within the month, still only 30 years of age, some say it was the shock of the news of Solway Moss that caused his early demise, other accounts blame syphilis.